Gilad's dinner was once again a hamburger at Burger's Bar. The wait is long for the burger to be fried on the fire. We sat inside, this was my second time in there this week with G waiting for the meat to be properly cooked and put into a bun with vegetables, and this time it seemed too much. Too much to be surrounded by all these people who eat meat like wild boars happily chewing away at a dead animal. [People say to me, humans are meant to eat meat, they are carnivores. Well maybe, but we have the CHOICE to do it or not, unlike wild animals who do it instinctly. Our "nature" is not a valid claim in this argument. In nature, mammals kill each other all the time.]
I went to stand and wait outside. I waited outside, by the train rail, by the tables set up, where people sat around them eating. I was standing near two young Charedi men eating away their meat.
Just eating it, and smoking. The smoke swirled by me and I smelled it for a moment but then the smell passed on. Both of them sat nonchalantly spread out on their chairs, seemingly serene, having a nice meal.
The man farther from me slowly finished his cigarette, I saw.
The train rolled by and I moved back from the tracks, in toward the people.
His cig came to an end, and with two confident fingers at the end of a long white sleeve

-flick-
Ever so vainly flicked with his two fingers, the cigarette, to a distance of three meters where it landed on the battered ground.
And he continued eating his hamburger.

And then I cried. 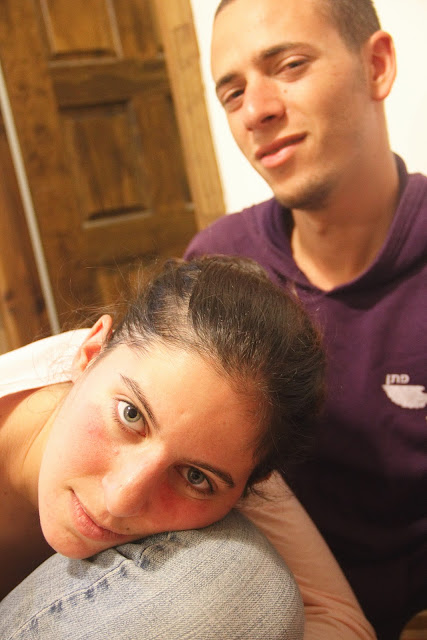 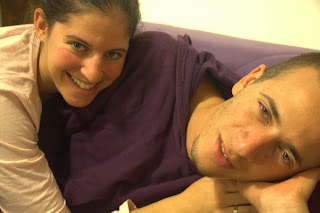 00:15 scared, walking around town, ending up in Mamila.
00:40 talking to Odelia on the phone, scared, sitting on stairs at Mamila
00:50 walking home and then taking a shower
1:10 watching standup comedy on the internet, to laugh and stop being scared and easily fall asleep
2:30 still watching
2:50 put down the computer and try to fall asleep with music in my ears
3:30 wake up from the music, shut it off, take it out of my ears
4:45 wake up with a start
5:05 wake up, after weird dreams. woke up for good?
But I haven't slept yet...
I'm starving.

I'm wondering when I'm more scared that something horrible will happen to Gilad and that I'll lose him forever: When he's home or when he's not home? I don't know.
I hate these horrible fears, no matter when.
I think the sad truth is that there's really no way to completely feel like you are another as well as yourself, In the end, every man and woman is lonely, alone in their own body and mind, and you can never merge with another being.
Posted by *Miriam* at 2:13 PM No comments:

I deeply appreciate your existence, I long for your closeness. I admire your being, I idolize your personality. I apply your laugh to my wind, I replay it over and over and over in my head.
I miss you, I so badly miss you.
I did pretty well. Much better than ever in the past. I didn't cry at all this week! I wasn't scared at home alone, in the dark. I was able to fall asleep without horrible, dark fears attacking my little mind.
I haven't had horrible fears all week, just little small ones, like always.
I made it through Sunday
through Monday
through Tuesday
through Wednesday.
Now it's Wednesday night and now I REALLY miss you.
Now I feel utterly alone for the first time all week.
The stretch of you since Sunday is fading
Come home already. I'm scared.

Today we had an orientation at art school before the official first day on Sunday.
For some reason right now I feel really nervous about something which I don't know of, and my hands are a little shaky. Soon Imma and Abba are coming with a disassembled closet which we will assemble here with the help of Eli and Menachem (Gilad's in miluim). But that's not a reason for nerves. I don't know. Maybe I just really want Gilad to come home already.
Anyway
At Musrara today I met for the first time the other ten or so students who will be with me. I think it'll be a good year. Well, an interesting one, at least. Small department, small school. That's why I liked it and wanted to learn here. High level but very open and individual.
Starting on Sunday.
Maybe THAT'S what the tension is about.
Well, hoping for the best...
:) 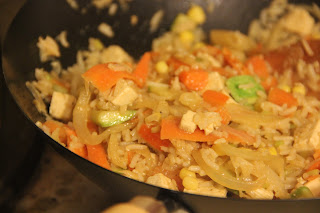 stir-fried veggies and rice with tofu for dinner last night 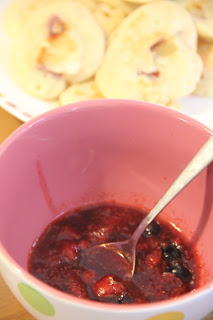 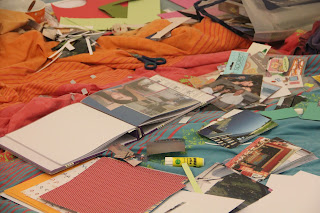 Finally working on my scrapbooks! Making scrapbook of summer '07 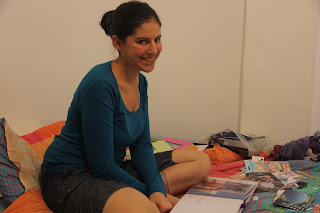 Police Shackle Anat Hoffman at for saying "Sh'ma" at Kotel
https://www.youtube.com/watch?feature=player_embedded&v=SzqYP7bJir0
Nauseating.
It's like in radical Islamist countries where women are not as free as men.
The extreme orthodox sect of Judaism in Israel has the monopoly on, well, anything that has to do with religion and relious sites, which is almost everywhere and everything when we're talking about Israel.
Women who sing as a group at the Kotel, or wear a talit, are arrested. Arrested!
This woman, Anat Hoffman, was sent to a prison cell overnight where she wasn't given even a blanket because of a "shortage in the prison" and she shared the cell with a car-thief and a foreign prostitute.
When taken from the kotel, she was pulled away with her arms held behind her back, as if she were a criminal.
At the police station she faced police violence, was dragged on the floor and had a full body check. As if she was hiding what?
Her voice inside, her talit?
Her freedom under her clothes?!

One of those contemplative nights, where every sound and movement in the lamp-lit streets is a pillar of salt.
Posted by *Miriam* at 3:08 PM No comments:

It still smells like NL and PP's kitchen in Florida!
Posted by *Miriam* at 8:27 AM No comments:

I smell blueberry muffins, I actually smell them
and the smell infuses me to Florida.
I say "infuses" because I don't want to say "reminds" because it doesn't just remind, but actually IS the memory.
And I need to invent a new word for that.
Posted by *Miriam* at 8:23 AM No comments:

The smell of this toasted whole-wheat bread reminds me of Florida
Posted by *Miriam* at 12:39 AM No comments: 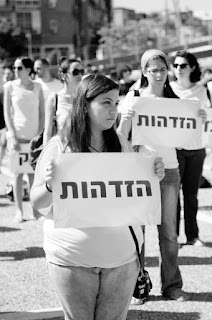