I was at a sacred song circle a few weeks ago.

It was a few nights after I had led one for women at my dear friend T's house. I needed to go to this other circle initially because I wanted to, eventually because I had to before I sunk into the abyss. I rode the bus and was having a panic attack. I felt dread and doom. It was the first wave of the coronavirus. I felt like there was no comfort in the world for the imminent death of everybody. I felt like a zombie. I had to go. I had to. I needed to drink from a well fast... I was desperate. I got there and had spoken to the man leading it, and felt courteous and sweet despite the dread inside. I was calm. I was so scared but I was calm. It was me and three men at the beginning, and we lit sage and candles and sang and played music in the dim room on carpets and pillows, and I drew into me strength from the great reservoir that we have available in our Jewish ancestry. Judaism is based on resilience and survival through thousands of years. And we are spiritual beings and can do that, we can draw from that great godly abundance. We can bring into ourselves the wisdom that surrounds us, even if we are not aware of what it is exactly. I drew from that. I said it as a mantra in my mind until it was tangible. Come to me, come, comfort, strength, courage, hope, I pulled it in with all my mental might. I had no faith, I felt helpless and small, but I drew hope into me as if it was my only option, I had no choice but to believe that there is hope, to believe even without believing. Hope, hope! I pulled it in. peacefulness, be within me, be within me. Until it was in me. Until I felt safer and more hopeful. Until the music resonated in those deep places of serenity and faith, trusting that it will be okay, it will be okay, it will be okay. Everything will be okay. And the harmonies danced in me, and the songs we sang over and over again escalated and resonated, echoed deeply, fully, in that dimly lit room.

I came out differently. I was alive again. 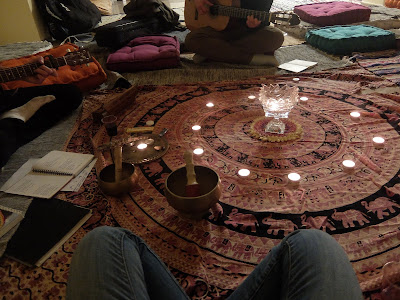